For two weeks in late June and early July 2015, western Europe and the Pacific Northwest of North America endured record-setting heat and parched landscapes. Other parts of the world got a taste of the heat, too, as new temperature records were set on three continents.

The map above shows daytime land surface temperature anomalies in Europe from June 30 to July 9, 2015. Temperatures for those ten days are compared to the 2001–2010 average for the same period. Shades of red depict areas where the land surface was hotter than the long-term average; areas in blue were below average. White pixels were normal, and gray pixels did not have enough data, most likely due to excessive cloud cover.

This temperature anomaly map is based on data from the Moderate Resolution Imaging Spectroradiometer (MODIS) on NASA’s Terra satellite. Observed by satellites uniformly around the world, land surface temperatures (LSTs) are not the same as air temperatures. LSTs reflect the heating of the land by sunlight, and they can sometimes be significantly hotter or cooler than air temperatures. Read more 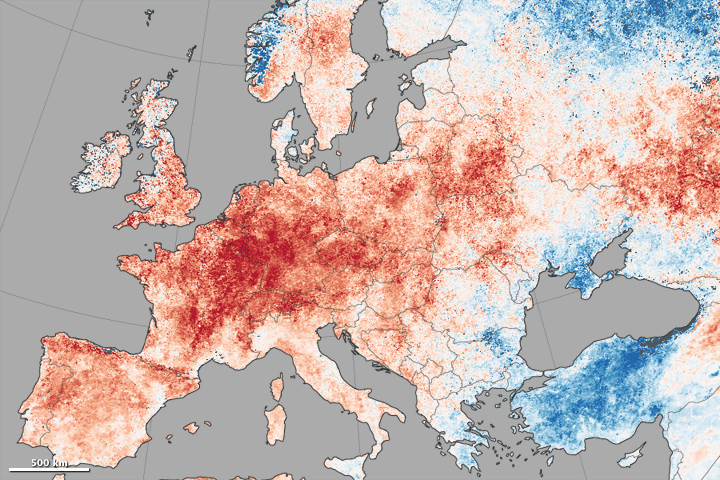 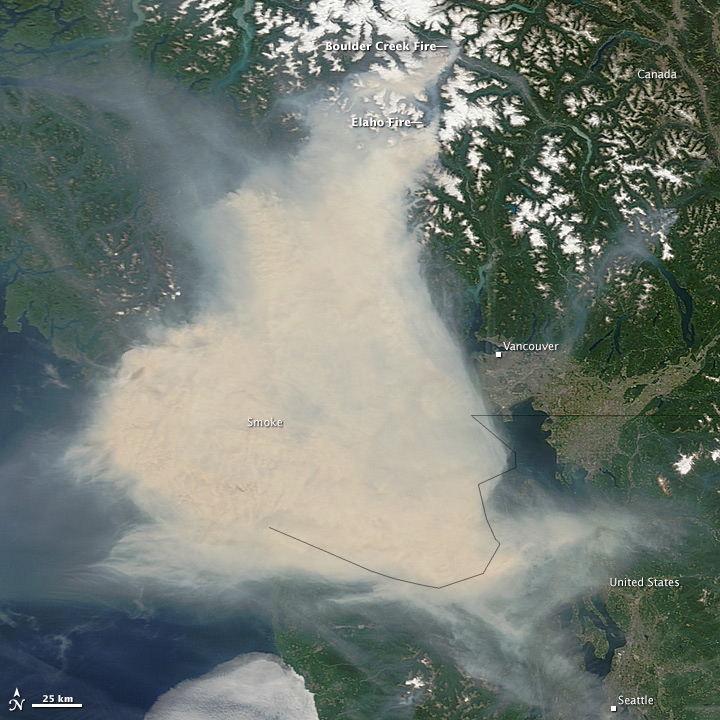 A difficult fire season in western Canada brought its impacts to coastal city streets in early July 2015. A thick pall of smoke settled over Vancouver and adjacent areas of British Columbia, leading some residents to wear face masks and health officials to warn residents and World Cup tourists against outdoor activities.

The Moderate Resolution Imaging Spectroradiometer (MODIS) on NASA’s Terra satellite acquired these images in the late morning on July 5 and 6. Note how the tan and gray smoke almost completely obscures the Strait of Georgia and southern Vancouver Island. Winds shifted abruptly between July 5 and 6, driving the smoke plume toward the east, dispersing it in some places while fouling the air in areas to the east, such as the Fraser Valley. Read more 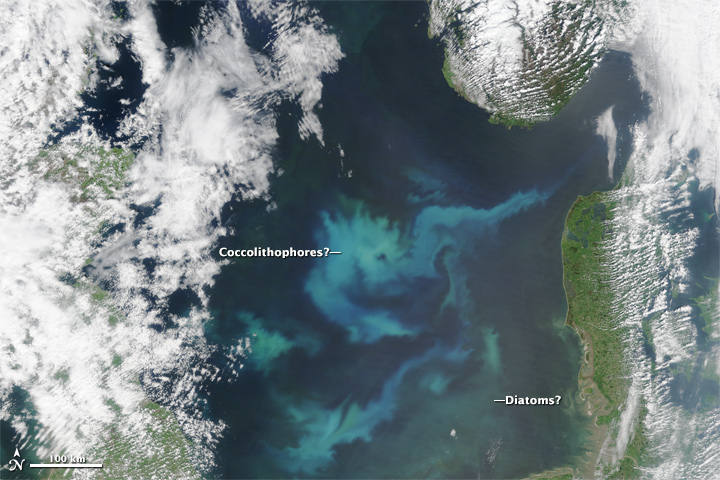 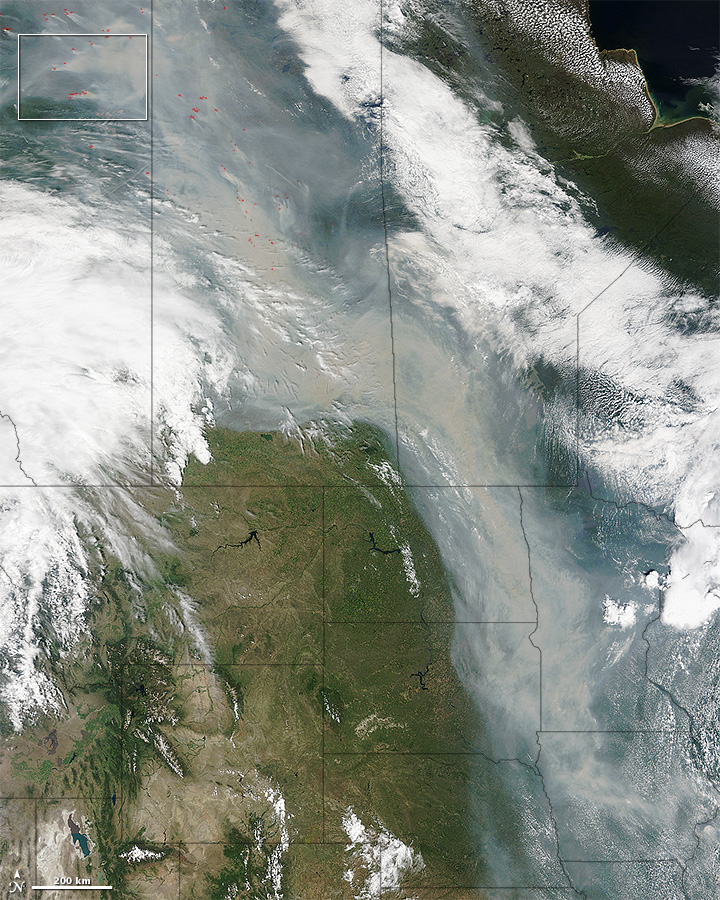 The 2015 fire season got off to an unusually early start in Canada when blazes broke out in the Northwest Territories, British Columbia, and Alberta in late May. As the season has progressed, the air in western Canada—as well as large swaths of the United States—grew gray and hazy with smoke.

Beginning on June 28, a sharp trough in the jet stream sent a river of smoke streaming south into the United States. By June 29, smoke darkened the skies over much of Saskatchewan, Alberta, Manitoba, North Dakota, South Dakota, Minnesota, and Iowa.

On June 29, 2015, the Moderate Resolution Imaging Spectroradiometer (MODIS) on NASA’s Terra satellite captured this image of smoke from hundreds of wildfires in western Canada. Read more 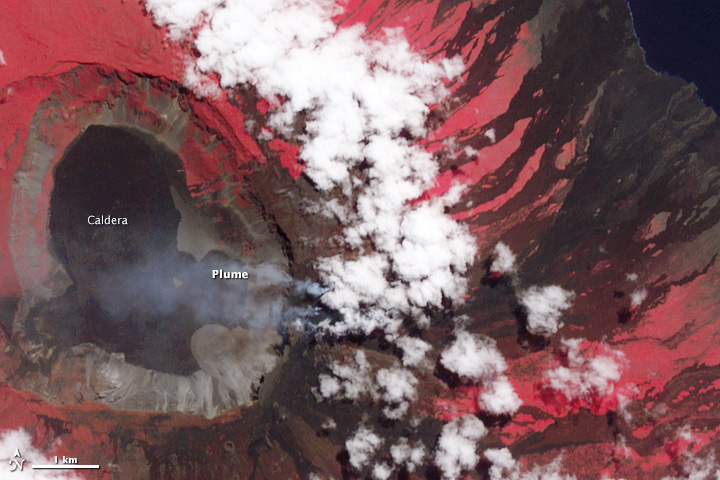 In late May 2015, the highest volcano in the Galapagos Islands erupted for the first time in 33 years. The explosive eruption at Wolf volcano on Isabela Island sent volcanic gases and ash roughly 15 kilometers (50,000 feet) into the sky, while lava flowed through a fissure, down eastern and southeastern slopes, and eventually reached the sea. In early June, the sulfur-rich lava flows on the slopes appeared to subside.

The wide image and closeup of Wolf was acquired on June 11, 2015, by the Advanced Spaceborne Thermal Emission and Reflection Radiometer (ASTER) on the Terra satellite. The false-color images combine near-infrared, red, and green light (ASTER bands 3-2-1), with vegetated areas appearing in red and lava generally appearing charcoal or black. Note, however, the infrared (IR) image on the top right, where the heat signature of the freshly placed lava appears as white streaks. (The image is smaller because the sensor has lower resolution.) Read more