Posted on September 19, 2013 by Sciencecodex.com

The MODIS instrument, or Moderate Resolution Imaging Spectroradiometer aboard NASA’s Terra satellite captured an amazing image of Typhoon Usagi on Sept. 19 at 02:25 UTC moving near the Philippines. Read more

Tropical Storm Humberto makes an ‘A’ for Atlantic on satellite imagery

Posted on September 18, 2013 by Sciencecodex.com

When NASA’s Terra satellite passed over Tropical Storm Humberto on Sept. 17, the MODIS instrument aboard took a picture of the storm and it resembled the letter “A” as it moves through the northeastern Atlantic Ocean. Read more 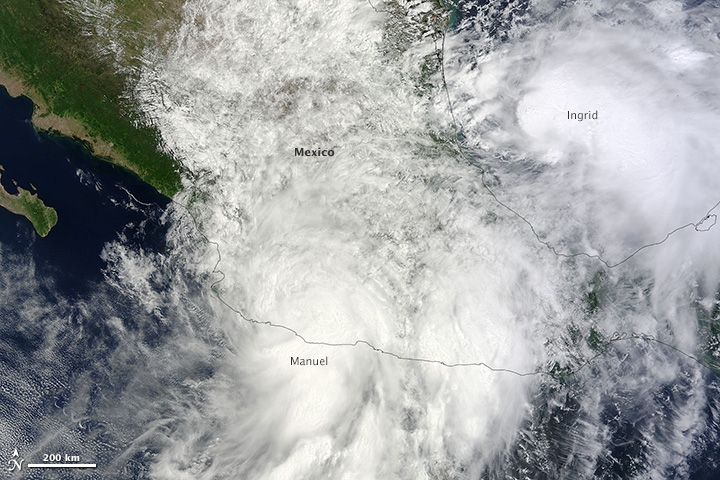 With 9,330 kilometers (5,800 miles) of coastline surrounded by warm tropical and subtropical waters, Mexico is no stranger to tropical storms. But on September 15-16, 2013, the country experienced a rare double strike as two storms moved ashore simultaneously, one from the Pacific and one from the Atlantic. The last time such an event occurred was 1958, reported the Weather Channel. Tropical Storm Manuel came ashore on the Pacific coast near Manzanillo on the afternoon of September 15. Hurricane Ingrid followed suit from the Atlantic on September 16.

The Moderate Resolution Imaging Spectroradiometer (MODIS) on NASA’s Terra satellite acquired this image of the two storms on the morning of September 15. At the time, Manuel, left, was a tropical storm with winds of 55 knots (102 km/hr or 63 miles per hour). Ingrid, right, was a Category 1 hurricane with winds of 65 knots (120 km/hr or 75 mi/hr). Read more

Posted on September 5, 2013 by Tassia Owen Posted in News and Events

The Rim Fire, near Yosemite National Park, is quickly becoming one of the largest fires in California history.  The Multi-angle Imaging SpectroRadiometer, MISR onboard Terra uses its nine sensors pointed in different directions to collect data on how sunlight scatters across Earth. MISR captured the extensive, brown smoke emerging from the fire.  This data is helping scientists understand how high these smoke plumes rise, disperse, travel, and ultimately affect air quality in other outlying areas.  NPR published an image of the Rim Fire by MISR as it’s image of the week on Sept. 4, 2013.  Read more

Posted on September 3, 2013 by Tassia Owen Posted in News and Events 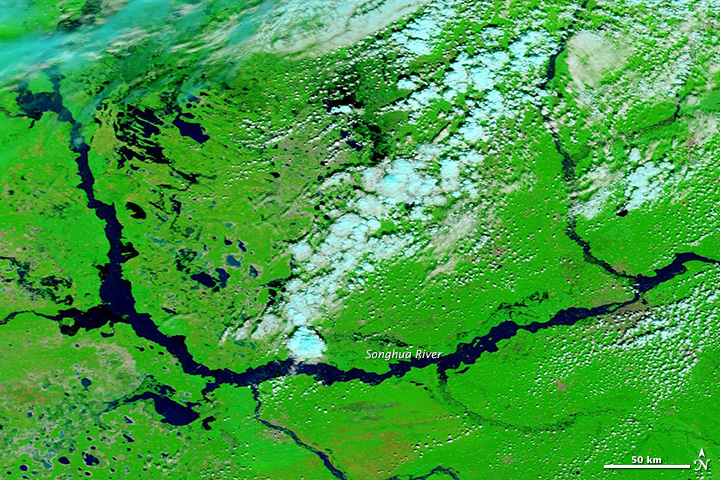 Summer rains have swollen rivers throughout northeastern China, including the Songhua River. Water levels peaked in Harbin on August 27 and have remained high. The Songhua River is one of many tributaries of the Amur (Heilongjiang) River, which is experiencing its most severe floods in a century. Read more