2015 a Dry Year for Snowpack in the Sierras

Posted on October 26, 2015 by Tassia Owen Posted in News and Events 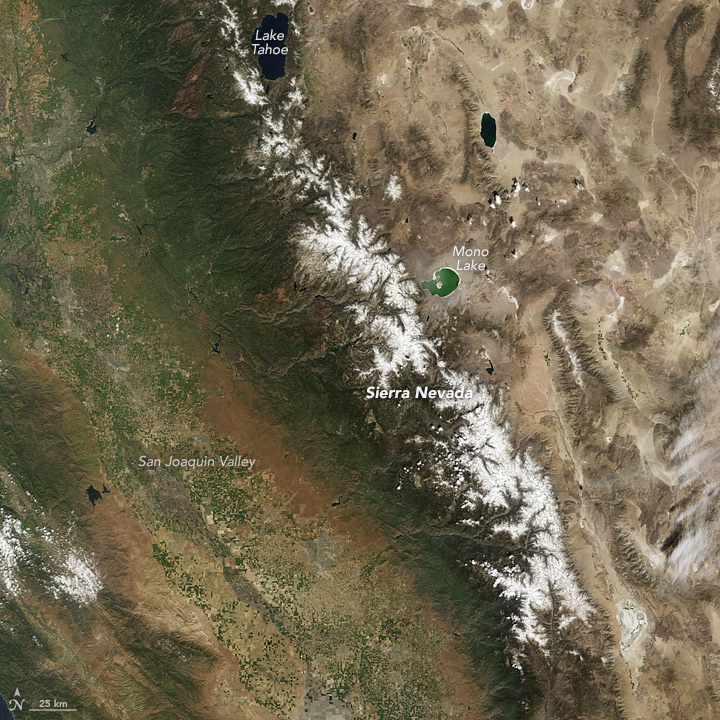 Snowpack in the Sierra Nevada range in Central California is at a record low. The Moderate Imaging Spectroradiometer on NASA’s Terra satellite captured this image, published on NASA’s Earth Observatory, of the Sierra Nevada, showing just how brown these typically very white, snow covered mountains have become since 2011, a wet and snowy year with extensive snow pack. To compare images from 2011 with 2015, used the image comparison tool on the NASA Earth Observatory site.

Since 2011, winter snow pack decreased, reducing amounts of melt water in the spring and summer. In March of 2015, ground-based monitoring sites in the Sierras reported that there was no snow cover for the first time ever, while about one-third of the sites were measuring at the lowest snow pack ever recorded.

In a recent article in Nature Climate Change, scientists from the University of Arizona used tree-ring records of precipitation anomalies to construct a 500-year history of snow water equivalent on the Sierra Nevada, showing just how unprecedented this lack of snow pack is in the past 500 years.