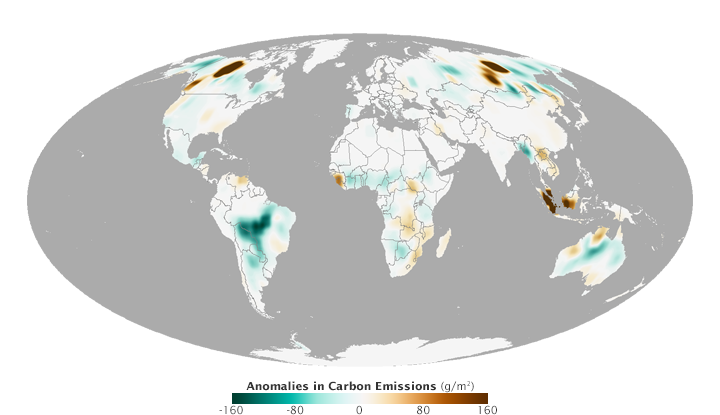 NASA Earth Observatory map by Joshua Stevens and Jesse Allen, using data from the Global Fire Assimilation System (GFAS) and the State of the Climate in 2014 report. Caption by Adam Voiland.

On Earth, there is always something burning. On a typical day in August, the Moderate Resolution Imaging Spectroradiometers (MODIS) on NASA’s Aqua and Terra satellites detect approximately 10,000 active fires, as well as huge swaths of freshly charred land in ecosystems ranging from boreal forests to savanna to tropical forests.

In order to determine how much carbon dioxide and other pollutants all these fires contribute to the atmosphere in a given year, scientists have developed computer models that combine satellite observations of burned area and active fires together with information about vegetation, fuel loads, and other details. Data produced by two computer modeling efforts—the Global Fire Assimilation System (GFAS) and the Global Fire Emissions Database (GFED)—were highlighted in NOAA’s 2014 State of the Climate report, published in the Bulletin of the American Meteorological Society. Read more