Posted on May 2, 2012 by Tassia Owen Posted in News and Events 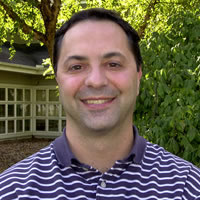 Dr. Larry Di Girolamo is a Professor and the Daniel Shapiro Professorial Scholar in the Department of Atmospheric Sciences at the University of Illinois at Urbana-Champaign.  He uses data collected from ASTER, MISR, and MODIS to study weather, aerosol and cloud properties.  More recently, he co-authored a paper that reveals high concentration of aerosol over the Indo-Gangetic Basin region in India from data collected by MISR.  In addition to being a prolific author, he also teaches courses in meteorology and satellite remote sensing.  He is frequently ranked as one of excellent teachers at the University.

LDG: I study cloud, aerosol and radiation processes in our atmosphere that occur over a wide range of scales. At larger scales, say from the size of a house to the size of the globe, satellites offer the only viable way to routinely collect observations of cloud and aerosol properties over our planet. And since meteorological satellites only measure electromagnetic radiation incident on its detectors, I spend a lot of my time studying how to convert these radiation measurements into meaningful information on cloud and aerosol.

The term weather and climate are often used interchangeably; can you discuss the difference between the two?

As an example of climate: the average temperature for the month of January in Chicago, Illinois, is -5.9°C.

You use multiple Terra instruments (ASTER, MISR, and MODIS) to study cloud properties such as cloud-top-heights.  Why is it important to study clouds?

LDG: Sunlight is our ultimate source of energy. Clouds, which cover about 68% of the globe, regulate the incident amount of sunlight reaching the surface and they contribute to the greenhouse effect more than any other atmospheric variable. Clouds are also an important component of the hydrological cycle, coupling the atmosphere and the ground through precipitation. During the life cycle of a cloud, there’s a large exchange of latent heat (the energy associated with a phase change in water) between the cloud and the environment. This exchange of latent heat impacts the dynamics of the atmosphere, hence the evolution of the weather. So clouds play a significant role in weather and climate that impacts our lives.

Given the significant role of clouds, it’s important that we understand their properties, how their properties evolve in space and time, and how to properly treat them within our computer models that make weather and climate predictions. When it comes to numerical weather predictions, the microphysical aspect of cloud and precipitation and associated exchanges of latent heat are leading sources of uncertainty. In climate predictions, the role of clouds remain a leading source of uncertainty for any given anthropogenic change scenario. If we want to reduce our uncertainty in weather and climate predictions, we need to continue to study clouds. Terra provides a great suite of instruments for studying clouds.

You also use MISR to study aerosols.  What role do they play in weather? 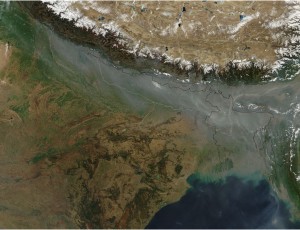 Gray haze builds along the front of the Himalaya Mountains in northern India in this MISR image.

LDG: To a lesser extent than clouds, aerosols also regulate the amount of sunlight reaching the ground. For example, in the absence of fog, it is the variability in aerosols that contribute the most to the variability in visibility. But perhaps more importantly in terms of their role in weather, is the fact that water vapor condenses onto aerosols to form clouds at a relative humidity near 100%. Without aerosols, hundreds of percent relative humidity is required for water vapor to condense to form clouds. So without aerosols, there would be very few clouds. Fortunately, there are plenty of aerosols provided by nature. The properties of these aerosols can modulate the properties of clouds, including the microphysical properties of clouds, rain production, cloud cover, and cloud lifetimes. There are also cloud processes that modify aerosol properties. This interaction between cloud and aerosol properties is currently a hot topic in atmospheric science research, and Terra data continues to contribute greatly toward our understanding of this interaction.

Another role that aerosols play is in the quality of air that we breathe. The acute and chronic health impacts, predominately to our respiratory and cardiovascular systems, from short and long-term exposure to aerosols are now well established. The World Health Organization has established air quality guidelines, which includes exposure levels in terms of the size range of airborne particulate matter. The particle size is a determinant in where and how it gets deposited in the respiratory system.   Since most humans live on land, observing aerosols over land is of primary importance. Before the launch of MISR, there were no good, quantitative satellite observations of aerosol properties over land. MISR was designed to provide information on the size and shapes of aerosols over water and land. With more than a decade of MISR data, we are beginning to see from space how the aerosol field changes due to natural events and human activities.

As you know Terra has five instruments that monitor various components that make up the Earth System.  Can you explain the dynamics among weather, land and oceans?

LDG: There are too many details to answer this question properly. So I can only answer in a very generic sense. Basically, the atmosphere, land, and oceans store and exchange heat and momentum. They also exchange moisture, and many types of gases and aerosols.  Ultimately, it is the uneven distribution of these quantities over the globe that forces the exchange of these quantities between land, ocean and atmosphere. The dynamics involved in this exchange manifest themselves to us in terms of weather, ocean currents, a changing biosphere (e.g., desertification), etc.  Terra provides a broad range of measurements necessary to make advancements in our understanding on how these exchanges take place from regional to global scales.

And, finally how did you get interested in science and, then, decided to study weather?

LDG: NASA’s Viking mission beamed back spectacular true color images of Mars. I was a kid when I first looked at those images – it completely reshaped and redirected my thinking. The visual cue of true color images from another planet was absolutely awesome. I was also a fan of Star Trek. So I enrolled as an undergraduate student in Astrophysics and later as a graduate student in Atmospheric Sciences. I became aware of environmental problems we faced on our planet and the challenges in observing Earth from space. I wanted to help, but I still wanted to work from the vantage point of space. I was fortunate to be part of the Terra mission. When MISR and MODIS beamed back wide-swath true-color images of Earth, I got that same awesome feeling as when I first looked at Viking images. And when we fused the multiple-views from MISR to produce 3-D images”¦ it was like floating in space!