Posted on April 18, 2012 by Tassia Owen Posted in News and Events 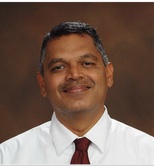 Dr. Sundar Christopher is a Professor in the Department of Atmospheric Sciences at the University of Alabama in Huntsville.  Other positions he hold at the University include Associate Director of the Earth System Science Center and Department Chairman of the Atmospheric Science.  He also hosts a professional development and career guide website, which he freely dispenses valuable advice to graduate students.

SC: Using satellite data, I study the role of aerosols on climate and air quality.

SC: At UAHuntsville ,ESS is a broad term for the organization that houses scientists who study Earth-atmosphere processes.

You use CERES and other remote sensing satellites to study aerosols, can you talk about the role it plays on the Earth’s atmosphere system and the importance of the study?

SC: Aerosols are a key component of the earth’s atmosphere. How aerosols affect climate is still a source of uncertainty. Satellite remote sensing is the only viable method for providing global, reliable measurements of aerosols. Detecting aerosols using multi-spectral, multi-angle methods and using CERES to quantify aerosol forcing is in my opinion one the major advances of aerosol science over the last decade. Now we can also assess the role of absorbing aerosols using OMI and analyze the vertical distribution of clouds and aerosols using CALIPSO. There is much to be done using Terra and A-train data sets.

CERES is also used to study energy balance and like ESS, the study is very complex.  Can you explain what energy balance is and its role in understanding future climate?

SC: Yes, energy balance is critical. In summary the net incoming solar radiation at the top of the atmosphere must be balanced by the outgoing radiation. CERES is indeed the best available source for providing this information over long time periods. While aerosols are short lived in the atmosphere they change the vertical structure of the atmosphere based on their absorptive properties and reduce solar insolation to the surface, all of which are important to climate. More importantly we have been using Terra data to calculate air quality near the ground which is useful for regions that do not have ground measurements of pollution. The effect of aerosols on clouds continue to be a challenging topic but a lot of progress has been made over the last decade.

SC: Believe it or not, I was sitting in a radiative transfer course during my graduate school days and the Professor was lecturing on the global radiative energy budget. I felt the light go on inside my head. That was nearly 25 years ago. I studied the radiative energy budget of clouds using ERBE and I later became interested in aerosols from biomass burning. Our first paper used AVHRR and ERBE data to study radiative forcing of aerosols using a few case studies. I was eagerly awaiting the launch of Terra and it is indeed truly rewarding to be able to provide global estimates of radiative forcing using Terra (from MODIS, MISR, and CERES).