Iceberg B-34 Makes Its Debut off Antarctica 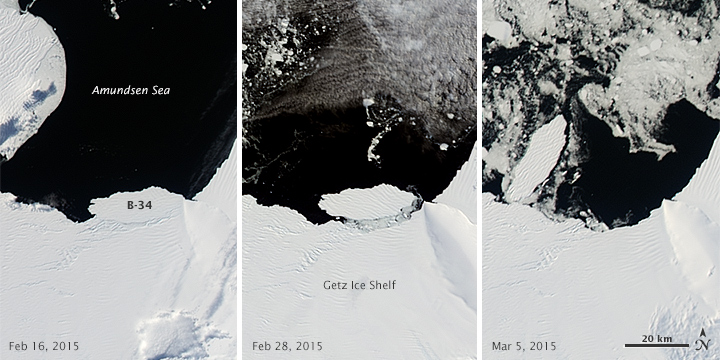 On March 6, 2015, the U.S. National Ice Center (NIC) discovered a new iceberg adrift off the coast of Antarctica. Measuring 27 kilometers (17 miles) long, iceberg B-34 meets the 19-kilometer minimum required for tracking by the NIC.

The berg appears to have fractured from West Antarctica’s Getz Ice Shelf and moved out into in the Amundsen Sea sometime in mid- to late-February 2015. The Moderate Resolution Imaging Spectroradiometer (MODIS) on NASA’s Terra and Aqua satellites acquired these images spanning the calving event. The first image (left) shows the iceberg on February 16, when it was still attached to the ice shelf. By February 28 (middle), it appears to have separated somewhat. By March 5 (right), it is floating freely. Read more