Posted on April 8, 2015 by Tassia Owen Posted in News and Events 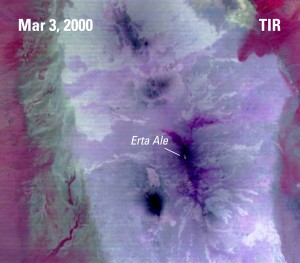 Fifteen years ago this month the Advanced Spaceborne Thermal Emission and Reflection Radiometer (ASTER) sensor onboard NASA’s Terra satellite began returning images. The first image from ASTER’s thermal infrared (TIR) subsystem was captured on March 3, 2000 of the western edge of the volcanic Afar Triangle in Ethiopia (see image to the right). This image represents not only ASTER’s first thermal image, but also the first high resolution multispectral thermal data collected by a sensor on a satellite. Since this first image 15 years ago, ASTER data has continued to be valuable to geologic and volcanic applications, as well as many other scientific disciplines.