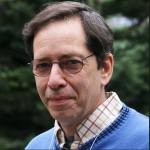 NASA climate scientist Ralph Kahn presented a Maniac lecture at Goddard Space Flight Center entitled, “The Stories Data Tell.” At an early age, Ralph found that separating causality from coincidence can be the lynchpin of understanding, and at times can help identify prerogatives or highlight the path toward the better options. Ralph shared his experiences, professional, personal, and at the intersection of the two, where the difference seemed to matter. And how data can help address this challenge, providing evidence one way or the other – sometimes!

Ralph Kahn, a Senior Research Scientist at NASA’s Goddard Space Flight Center, received his PhD in applied physics from Harvard University. He spent 20 years as a Research Scientist and Senior Research Scientist at the Jet Propulsion Laboratory, where he studied climate change on Earth and Mars, and also led the Earth & Planetary Atmospheres Research Element. Kahn is Aerosol Scientist for the NASA Earth Observing System’s Multi-angle Imaging SpectroRadiometer (MISR) instrument on NASA’s Terra satellite. He focuses on using MISR’s unique observations, combined with other data and numerical models, to learn about wildfire smoke, desert dust, volcano and air pollution particles, and to apply the results to regional and global climate-change questions. Kahn has lectured on Climate Change and atmospheric physics at UCLA, Caltech and many other venues, and is editor and founder of PUMAS, the on-line journal of science and math examples for pre-college education.