Why Citizen Science for Water Quality?

No matter where you live-along the coast, in the heartland, or somewhere in between-your life is affected by water quality. Water quality issues raise many questions that are important to us all at some point or another. Is the tap water safe to drink? Will I get sick if I swim in this lake? Why are so many fish dying in the bay? Why does this water look unusual-murky, discolored, or even remarkably clear?

Perhaps one of the most important questions to ask is: How do we know when our water is healthy? To put it simply, healthy water is water that can support and sustain life. “Water quality” is a blanket term for how the physical, chemical and biological characteristics of a water sample measure up to a set of standards. Water quality can be evaluated through a number of different tests such as color, odor, temperature, acidity, bacteria content, biological diversity, and many others.

In places like Chesapeake Bay, a major water quality concern stems from nutrient loading (increased levels of dissolved nitrogen and phosphorous). As water makes its way through a local watershed (region of land that drains into a body of water) and eventually to the ocean, it is inevitably affected by how people use the land. Runoff from fertilizers applied to agricultural fields, golf courses, and suburban lawns; deposition of nitrogen from the atmosphere; soil erosion; and
discharge from aquaculture facilities and sewage treatment plants all contribute to increasing nutrient content in coastal waters.

More than 150 rivers and streams feed the Chesapeake Bay watershed. Over the last several decades, more and more land in the watershed has been converted from forest to farms, cities, and residential suburbs. This development has brought with it an increase in the land area covered by hard surfaces like roads, sidewalks, parking lots, and rooftops in places where nutrient-rich water was once absorbed and filtered by soil and plants. Higher-yield agricultural practices have also played a role in contributing increased amounts of nutrients to rivers and streams in the watershed during this time. “Dirty” water now flows,
largely unfettered, through the watershed, which has led to an overabundance of nitrogen and phosphorous in the Bay. Algae (also known as phytoplankton) in the water feed off these nutrients and can bloom in excess when nutrient concentrations get too high. These algae are the base of the marine food chain and are essential to the health and productivity of the oceans. However, when they are overfed, they can do more harm than good. Algal blooms can prevent sunlight from reaching the bottom of the bay, resulting in a loss of aquatic vegetation and disruption of animal habitats. Decomposing algae can deplete dissolved
oxygen in the water to dangerously low levels. This process, known as eutrophication, can result in fish kills and suffocation of other marine life. If enough oxygen is removed from the water, the area becomes a “dead zone,” where no aquatic life can survive. 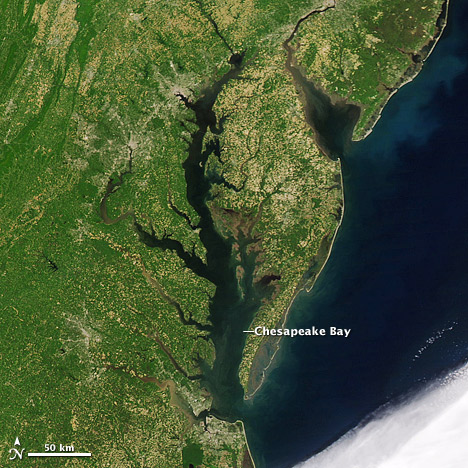 In the 1970s, Chesapeake Bay developed one of these dead zones. Fortunately, dead zones are reversible. By monitoring local water quality, key sources of nutrients can be identified and actions can be taken to ensure that harmful nutrient loading is reduced. Today, Chesapeake Bay continues to struggle to recapture its health, and remains on the Environmental Protection Agency’s “dirty waters” list. Read Drought and Deluge Change Chesapeake Bay Biology to find out how Chesapeake Bay resident and NASA scientist Jim Acker was able to identify links between nutrients and water quality in Chesapeake Bay.

How Citizen Scientists Can Meaningfully Contribute Using Their Own Observations

The benefits of water quality monitoring have been likened to those of visiting your doctor for periodic checkups. Observing trends over time can help avoid major health problems or readily identify them when they do occur. Bodies of water in the United States are monitored not just by state, federal, and local agencies, but also by universities and volunteers.

University or government-funded scientists typically monitor water quality at the mouth of major river systems, but they do not have enough resources to track water quality through every river and stream in a watershed. This makes volunteers and citizen scientists vitally important in the effort to monitor and maintain water quality standards across the nation.

Citizen scientists can meaningfully contribute by monitoring water quality (including nitrogen concentration) in a nearby river, lake, or stream, and identifying potential sources of pollution in their local and regional watersheds. This can significantly increase the amount of water quality data available to government agencies for bodies of water that may otherwise go unassessed. A network of citizen scientists can potentially monitor an entire watershed. This type of grass-roots science has great potential for identifying local sources of contamination, which could ultimately be used to reduce a community’s impact on the ocean.

With the help of watershed maps, the paths of streams and rivers can be traced to the ocean. Citizen scientists can then tie their local water quality observations to marine phytoplankton blooms observed by NASA satellites, and identify potential dead zone locations. Although dead zones cannot be directly identified from space, algal blooms can be tracked by monitoring chlorophyll concentrations in surface waters. By looking at variations in chlorophyll levels over time, citizen
scientists can determine if relationships exist between local events in their own watershed and phytoplankton blooms in the ocean. For example, a citizen scientist in Missouri or Iowa might monitor the Gulf of Mexico near the mouth of the Mississippi River and note that ocean chlorophyll levels increase about two weeks after nitrogen levels spike in their local river. By correlating satellite observations with a unique network of ground observations, a new understanding of the dynamics that drive phytoplankton blooms may emerge in the scientific community.