To improve air quality, it is important to know what contributes to polluting the air. Haze comes from a variety of sources. Your skies may be hazy from local traffic, or industry such as for example coal burning power plants, or the pollution may be coming in from somewhere else farther away. Satellite images help identify large areas of pollution caused by fires, dust or sand storms, volcanic eruptions, large industrial sources, or the transport of man-made pollution from other regions. Smaller sources, such as small industries or local roads won’t be visible in satellite images.

Photo-like, true color images provide a very simple way to see if smoke, dust, or haze is being transported into your region.

Smoke from western wildfires covered much of the United States on August 4, 2007. (NASA image by Holli Riebeek and MODIS Rapid Response). 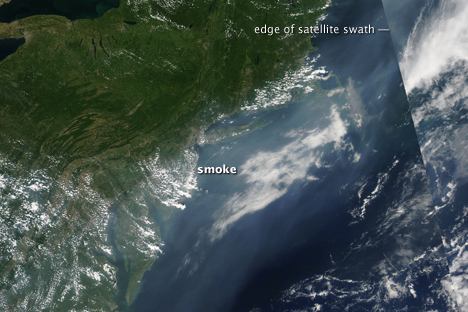 This image shows the transport of smoke from forest fires in Idaho and Montana across the United States and over the Atlantic Ocean. The haze is gray-white and is smooth in texture compared to clouds.

NEO was designed to provide easy access to global satellite images for teachers, students, museums and other public organizations, and citizen scientists. The system generates images based on data from various satellite instruments. For aerosol optical depth, a color is assigned to a range of aerosol optical depth values. NEO’s analysis tool allows you to click on the image to get the data value assigned to the color at the point you selected.

Using NEO, you charted the aerosol optical depth for your observation location. Another powerful tool for accessing, visualizing, and analyzing NASA satellite data is Giovanni. With Giovanni, you can correlate aerosol optical depth measurements for your region with EPA ground measurements of particles to find out if the aerosols the satellite measured were high in the atmosphere or close to the ground where they affect the air we breathe. You can also use data from another
satellite, CALIPSO, to find out where aerosols are in the atmosphere.

For instructions, please see Pollution in the United States and China on the Giovanni web site.