Why Citizen Science for Precipitation?

How successfully do rain gauges catch rainfall patterns? Do the satellites record the same patterns of data as the ground-based gauges? How many gauges are required in order to observe regional patterns in rainfall? Scientists compare measurements from rain gauges with satellite measurements to answer these and other related questions. By increasing the number of rain gauge measurements, citizen scientists can help increase the overall accuracy and precision of space-based precipitation monitoring. Using the June 2008 Midwest flood event, this section illustrates how to explore satellite data and rain gauge data together to answer questions about regional rainfall.

For this example, we are going to use a station in Monroe County, in south-central Indiana. The station, near Indianapolis, Indiana, received a record-breaking period of rainfall from June 2-12, 2008. This extreme rainfall event subsequently caused intense flooding in the Ohio and Lower Mississippi watersheds.

How to find a station of interest in CoCoRaHS.

Part 2: Above and Below

Comparing CoCoRaHS data with NASA Satellite data from the same location and time period. This example uses the 3-hourly TRMM and Other Rainfall Estimate (3B42 V6).

The Tropical Rainfall Measuring Mission (TRMM, pronounced “trim”) satellite is the most accurate rainfall observing satellite to orbit the Earth. It carries a suite of five instruments that, when combined, allow scientists to gather a very detailed three-dimensional view of rainfall patterns. However, these instruments do not directly measure precipitation. Instead they use a combination of active radar and passive measurements to record the energy and water vapor flowing through the atmosphere. This data allows scientist to estimate precipitation patterns on large scales across the Earth. One instrument is “passive,” observing the intensity of radiant energy that the atmosphere, land, and ocean emit into space at microwave frequencies. The other instrument is the first weather radar in space, recording vertical profiles of rain, similar to surface-based radar systems.

Together, these data sets allow scientists to build a 3-D picture of rainfall patterns in space and time. These estimates are calibrated by comparing the results to ground based observations, such as rain gauges and radars, with the satellite data. By increasing the number of rain gauge measurements scientists will be able to increase the overall accuracy and precision of precipitation monitoring.

Step 1. Compare time series data from several rain gauges with that from the Satellites. 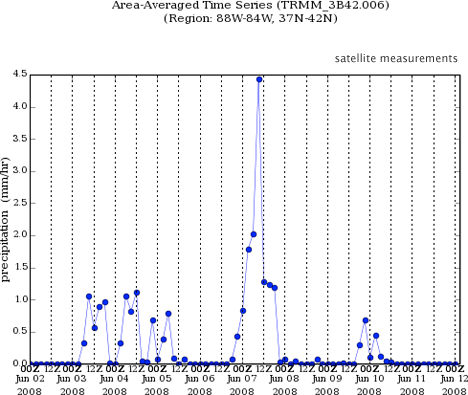 While rate versus time is one way to analyze data for several gauges, a broader way to look at rainfall rates across a larger area is on a map. In this example you will plot rainfall rates for this time period on a map for the area. The resulting map will help you to understand where the rainfall was the greatest, allowing you to relate this information to other geographic information such as topographic features and urban areas. In this example, we are going use the rain gauge and TOVAS satellite data for the state of Indiana.

Once Google Earth has loaded, the file you will be able to see the precipitation pattern over the region that you selected.

In the summer of 2008 there were major floods in this region. Add the USGS EDNA watersheds layer.

Use the map to predict in which watersheds the floods would have occurred. How might you, as a local weather personality or hydrologist have advised the citizens living this region? Would you have encouraged citizens living downstream of Indianapolis to evacuate? Read more about this flooding event at an online news source such as MSNBC or CBS online.

You can broaden your understanding of the event using Giovanni to further analyze the satellite data.

Some other interesting visualizations that can be done in Giovanni:

Other groups also collect precipitation data, which may be used in a comparison with satellite data. These groups include:

Related questions that could be addressed with satellite data: